Folk from the bush 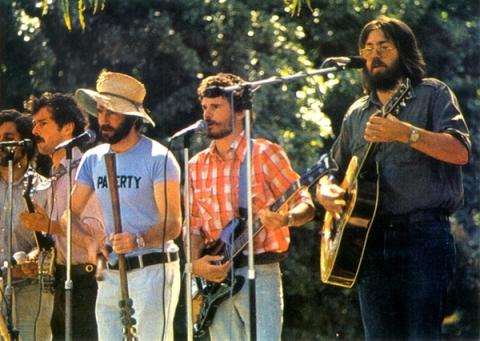 WHEN Franklyn B Paverty first performed in Queanbeyan in 1974 they were described as a group of students out for a lark.

Formed by a group of ANU students in the early 1970s, one of the bush band’s first performances came during a taping on Channel Nine’s New Faces series at the Queanbeyan Leagues Club.

Host Terry Dear was less than impressed by the students.

“We were all uni students and we weren’t dressed that well. We had to get one of the producers had to come and get us in.

“Terry Dear said we were students out for a lark, but I thought we did well.”

Nearly four decades later the band has shared the stage with some of the biggest names in music and comedy including The Dubliners, Billy Connolly and Slim Dusty during countless gigs in woolsheds across the country.

The full bush band includes a banjo, fiddle, guitars, vocals and bass as well as the traditional bush band staple, the lagerphone.

The instrument is a made up of an upright pole with a number of bottle caps nailed into it.

“In its current form the lagerphone is only fairly recent but it goes right back to middle east where marching bands used a marching sticks with bells on it. The British army had a similar instrument, called the Jingling Johnny.

“This is the Australian equivalent. Every respectable bush band from the 1950s onwards had a lager phone of some sort.”

Several years later the friends found themselves studying at ANU together.

The founded the band then known as Franklyn B Paverty and the Platte Valley Crooners; as a tongue-in-cheek dedication to the jazz musician by the same name.

These days the group has grown to include Bob Buckley, Peter Hobson and Peter Logue.

Franklin B Paverty will join hundreds of performers lined up for the 46th annual National Folk Festival at Canberra’s Exhibition Park next month.

From April 5 more than 50,000 folk fans will descend on the capital for five days of local and international folk music.

Franklin B Paverty will appear on one of 22 stages for three performances across the weekend.

As well as traditional Australian bush music varied with the occasional swing, blues, or old rock ’n’ roll touch, they will also present a unique song cycle dedicated to Ulick O’Boyle, a renowned Irishman who formed the group The Settlers.

O’Boyle wrote thousands of songs about the Snowy Mountains and Canberra region from the 1960s.

“We first played at the National when it was held at the ANU in 1976,” Chalker said.

“Back in the 1970s and 80s there were bush bands all around the district. There’s not many of us left.

“We think it’s important to keep singing the old songs about the shearers, bushrangers and convicts, otherwise they could die out.”

Where: Exhibition Park in Canberra