Once we could dance the night away 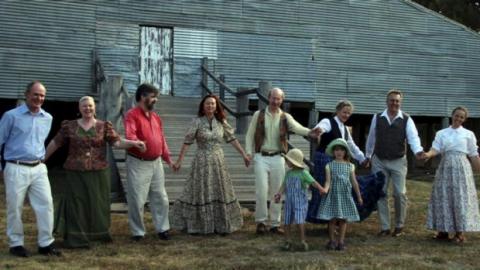 However much fun everyone has at the shearers' ball at the Yarralumla Woolshed on February 2, 2013 it won't be such prolonged fun as the dancers had there on the night of November 30, 1907.

Of the ball that began there on that 1907 night, the Queanbeyan Age reported: ''Dancing commenced shortly after 8pm and was kept up until daylight next morning, the only break made in the dancing being for supper [at midnight]''.

Organisers of the coming shearers ball tell Gang-Gang, laughing, that even if they had the vim to dance all night, the Yarralumla Woolshed has to be hired from the government these days, and the hours of use are regulated.

But in 1907 squire Frederick Campbell of Yarralumla (today his manor lodges the Governor-General) seems to have loaned his woolshed with no regulations and the wildly successful ball, held to raise funds for the Queanbeyan Hospital (it raised £16), clattered on all night, the dancing punctuated with songs.

It may have been the first dance held there, the shed having only been built in 1904.

Of course, these days we think a woolshed is perfect for a bush dance exactly because it is a woolshed (what could be more authentic?) but in the venue-poor Canberra and region of 1907 it was surely the lovely roominess of the woolshed that was its attraction. Thank you, Mr Campbell.

February 2's shearers' ball is the opening event of the ''Kick Up Your Heels'' series of Centenary of Canberra happenings being presented by the Monaro Folk Society.

The shearers' ball is preceded on the Saturday afternoon by a children's dance. The Age tells us that the music for the 1907 shindig ''was provided by the Misses Meredith (piano and violin) and Mr W Cantle (cornet) and was really first class''. But the Misses Meredith and Mr Cantle are no longer with us and so for the forthcoming ball (Jenny Wardrobe of the Monaro Folk Society promises it will be ''a low-cost, alcohol-free, family friendly event that represents the time when all the family attended community dances'') the rafters will be rattled by the renowned Canberra bush band, Franklyn B Paverty.

Everything your heart desires to know about the ball, including how to buy tickets, can be found at the Monaro Folk Society's website.